At its General Assembly held on july the 17th, 1996 in Atlanta, the International Gymnastics Federation decided to admit trampoline and sports acrobatics. 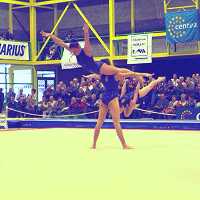 On may the 24th, 1998 in Villamoura, the General Assembly of the International Gymnastics Federation approved at a very large majority (84%) the final proposals of the presidents of the trampoline and sports acrobatics federations to incorporate their federations into the F.I.G.. It is provided to create two new technical commissions : one for trampoline and tumbling, one for sports acrobatics (without tumbling). Both commissions are composed of nine members, two of them being designated by the F.I.G.. The seven other ones are elected by the final congress of the merging federations. It is also stipulated that national federations affiliated to the F.I.T. and/or to the I.F.S.A. are not bound to merge into its national gymnastics federation but that, from 2000, only F.I.G.-affiliated gymnastics federations will have the right to vote and to present candidates for the technical commissions.

On october the 6th, 1998 in Sidney, the International Trampoline Federation pronounced his dissolution on decembre the 31th, 1998. The decision was taken at a large majority : 33 votes for it, 4 against it. The merger is effective sonce january the 1st, 1999.

On october the 27th, 1998 in Minsk, the congress of the International Federation of Sports Acrobatics ratified by 24 votes for and 4 against, his dissolution on decembre 31th, 1998 and its merger with the FIG. Due to a miscounting of the votes for the F.I.G. Sports Acrobatics members election, a new election was organised in january 1999 and the merger, previously foreseen for january the 1st, 1998, is only effective since april 1999.

Based on an original idea of the FFGym.